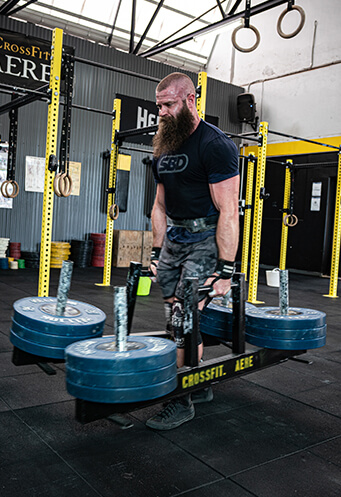 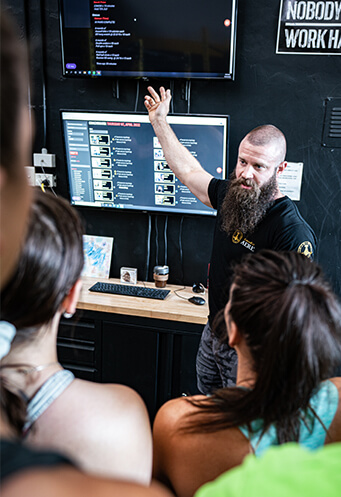 “ONLY IN DEATH DOES DUTY END”

Darren is the Head Coach and Owner of CrossFit Aere. Darren’s first exposure to fitness was at the age of 19 through playing American Football for the Eastside Razorbacks. He played for the club for a total of 17 years (unless Coach Lieberenz can convince him to play one more), starting out as Corner Back & Strong Safety, then moving to Linebacker and Defensive Line as he increased in size, strength & power.

Playing such a violent contact sport in a small body quickly had Darren realize he needed to get into a gym to develop further as an athlete. A friend got him down to a commercial gym and thankfully introduced him to traditional strength training; deadlifts and back squats. This sparked a love for health and fitness, and led to Darren attending the Australian Institute of Fitness (AIF) to complete his Certificate IV in Fitness and to start working in the industry.

Darren has worked in the fitness industry since 2010, starting out as a Personal Trainer (PT) at Fitness First Hindmarsh. Nearing the end of Darren’s first year as a PT he applied and attained the PT Managers role. Fitness First was then acquired by GoodLife, where Darren continued to work as a PT and Fitness Director for over 8 years.

Darren found CrossFit in 2013 while training at his friend Jason’s box, CrossFit Brawn. After several months of loving the intense training style, Darren decided to complete his CrossFit Level 1 (CFL1) as he felt it would greatly benefit the vast array of clients he was working with at the time due to the variety of movements, training styles and most importantly the community that was created through shared hardship.

After 4 years of running CrossFit style workouts in a commercial gym Darren took the steps (after a nudge from a friend, thank you x) and opened CrossFit AERE in 2018. Since that time CF AERE has grown into a very family orientated community with athletes from all walks of life.

Darren’s coaching style is very old school, with a ‘no fluff’ approach. He calls it as he sees it. A BIG believer that he is here to help you become the healthiest and strongest version of yourself by getting you to move better through; skill development, focused strength phases and mental toughness building – that will never involve ‘cheerleader coaching’. You know you’ve done well if you get a fist bump or one of the rarely seen approving head nods.

Darren has committed to increasing his knowledge and skillsets as a coach by studying various health and fitness qualifications, as seen below. Darren has spent most of his years training himself to become a faster, stronger and more powerful American Football player, so a lot of training time has been spent using explosive movements in the gym and on the field. Outside of that Darren loves simple strength training; Powerlifting, Olympic Lifting and Strongman training, are the main areas he focuses on now that he has retired from playing American Football. 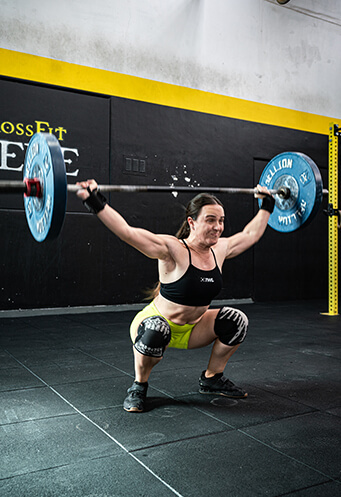 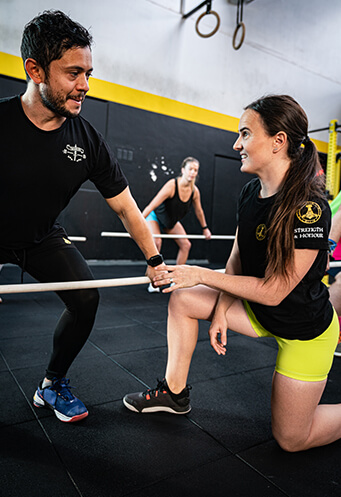 “NO MATTER WHERE YOU ARE ON YOUR JOURNEY, WHEN YOU SHOW UP AND WORK HARD IT IS INSPIRING SOMEONE”- unknown

Lorraine is a Coach at CrossFit Aere and a mum of two beautiful children: Brodie and Melody.

Lorraine has been active from a very young age, beginning her journey with rhythmic gymnastics at the age of 7, she learned many routines and competed in countless competitions over the next 5 years.

At the age of 13 the opportunity arrived to play team sports; Lorraine’s school offered positions in the SAPSASA program for Softball. Lorraine played softball for various clubs over a 10-year period. At the age of 16 Lorraine took up playing Hockey for ‘Grange Royals Hockey Club’  and played both Softball and hockey as one was a summer sport and the other a winter sport. There wasn’t a time of year where a weekend wasn’t filled with sport. 16 years later and Lorraine is still currently playing for ‘Grange Royals Hockey Club’ as one of their dominant strikers and mid fielders.

If that wasn’t enough, Lorraine then decided to join her local gym, GoodLife Hindmarsh, and got involved in group fitness. This is where Lorraine met Darren, who at the time was the Fitness Director, as well as a PT and group fitness instructor. They worked together as PT and client with a focus of getting her stronger and faster for Hockey, but also entered a couple of internal fitness competitions, which Lorraine absolutely crushed, proving to herself at the time that she was truly capable of so much more.

In 2016 Lorraine fell pregnant with her first baby Brodie. Darren being fully educated in pre- and-post-natal training was able to continue working with Lorraine to keep her strength up and stay healthy when playing sport was no longer an option.

In 2018, CrossFit Aere opened their doors and Lorraine was one of the first to join, exposing herself to more complex training methods and movements like snatches, double-unders, handstand push-ups, etc.

In 2019, Lorraine fell pregnant with her second baby, Melody. Lorraine continued training at the box and was heard frequently speaking to the other mothers about staying active throughout the pregnancy

“To keep my body moving during pregnancy was the best thing I could do, for me and my new daughter”.

Lorraine continued to strength train during and after both her pregnancies, this helped her recover faster and be able to enter local CrossFit competitions and get back out on the Hockey field sooner.

Being healthy, active, and engaging in sport has always been essential for Lorraine. After 8+ years training with Coach Darren, Lorraine was approached to complete her CrossFit Level 1 Certificate and become a coach for CrossFit AERE. This has allowed Lorraine to further develop her knowledge within the fitness industry and evolve her development as an athlete.

“CrossFit has not only helped me get those big lifts that I love, but it also helps me in everyday life. I have become much faster on the Hockey field and can enjoy doing outdoor activities with my children”

Lorraine’s passion and drive as a coach is helping members find what they are truly capable of doing and creating those healthy habits for your body and mind.

Being a badass mum!

We offer a FREE 7 day trial, so what are you waiting for?! You have nothing to lose!
Free 7 day trial